A Farewell by Frank (to Parliament) 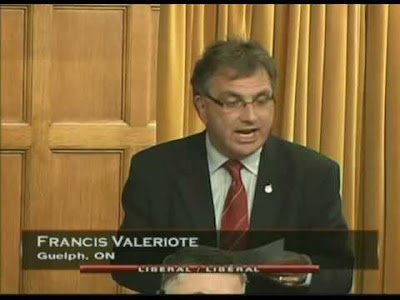 With the legislative year winding down, many MPs are enjoying (or dreading) their last days in office. Over 50 Members of Parliament from all parties have decided that they will not run for re-election in this coming fall's Federal campaign, and one of those politicians is Guelph's own Frank Valeriote. For many residents of the city and riding of Guelph, Valeriote is considered a great and influential public servant, one that's been open, available, and responsive to the people he represents. As much as politicos look forward to an open horse race here in October, Valeriote will be missed. And if you read his final remarks in the House of Commons below, you can tell that he's going to miss it too.


Here's the full text of Valeriote's address (courtesy of the Mercury's Editors' Blog):

Mr. Chair, there are days in this chamber that feel like seven years, but as my seven years as the member of Parliament for Guelph draw to a close, I feel as though it were only days that I was here. Saying goodbye today seems as unlikely to me as having ever arrived in this place.

I never planned on running for federal office and even tried, unsuccessfully, to find someone else to run instead. When I was approached in 2006, I had a young family, and representing Guelph here in Ottawa was not even on the horizon. However, my father, Mico, a Rotarian, instilled in me at a very young age the importance of service to others, even before self. I could not say no to serving my community, and what a community.

Guelph is recognized throughout the country over as being one of the most informed, caring, and compassionate in Canada. It is a leader in research and innovation through the University of Guelph. It is home to many of Ontario's premier agricultural and agrifood institutions, and has the highest rates of volunteerism from coast to coast to coast.

I remain imbued with the passion and desire to continue to be the voice of the people of Guelph here in Ottawa and to serve them with as much energy as my staff and I have been able to offer. However, that young family from seven years ago is still young and I am not. I need to spend what time I can with my daughter, Olivia, and son, Dominic. It is just as important to them and to me that I be there for their millionth steps as I was for their first ones. Indeed, it is more important. At this precious stage in their lives, I want to be a more constant presence.

I will miss this job, though. I thought that I knew what it meant to have job satisfaction until I stepped into my constituency office. One can never beat the feeling of gratification from having a direct impact on someone's life, be it helping them gain freedom and security through entry into Canada on a permanent basis, or just reuniting a family for a visit who might otherwise never see each other again. Maybe it is arranging for a family member to come to Canada to help her sister care for a child stricken by cancer, or when a woman's dying wish is to become a Canadian citizen, arranging for a citizenship judge to oversee the administration of the oath over the phone, surrounded by her family at a hospice.

Sometimes people can feel powerless as they attempt to navigate the bureaucracy that goes along with claims for employment insurance, obtaining a pension, or receiving disability benefits or tax relief. Being there to guide their bureaucratic journey and bring about a resolution is so important.

I have had the chance to advance significant discussions, too, hosting town halls on important and, often to the chagrin of some of my staff, contentious issues like palliative care, physician-assisted suicide, genetically modified organisms, food safety, elder abuse, the environment, and suicide prevention. I have encouraged many in Guelph to get more engaged and share their opinions on the important issues of the day, regardless their position on the issue.

Incredible opportunities have been offered to me as a member of Parliament. I was able to spend time aboard HMCS St. John's, and at Canada Forces Base Wainwright in Alberta, where I integrated with the women and men of the Canadian Forces, watching up close the incredible work they do. I travelled to Rome with the United Nations Food and Agriculture Organization and then again later with MPs from all parties for the elevation of Cardinal Collins, who was also born in Guelph.

Recently, as the veterans affairs critic, I had the opportunity to stand before Vimy Ridge and then listen to Canadian students recite In Flanders Fields mere feet from where John McCrae cobbled it amid the carnage at Essex Farm Cemetery. I was able to walk row on row through the poppies and consider the tremendous sacrifice of our brave men and women who accepted unlimited liability as they faced colossal odds in the service of Canada.

Along with the Prime Minister, the Minister of National Defence, the Minister of Veterans Affairs, and a delegation of MPs, I visited the Netherlands and spoke with Canadian veterans and Dutch citizens who had been at Wageningen 70 years ago when the Canadian Forces liberated the country. I walked in a parade 3,000 strong in complete silence in Groesbeek to a cemetery on the edge of town where thousands of Canadians are buried.

My party has given me the privilege of advocating on behalf of farmers and producers as critic for agriculture and agrifood, the automotive sector that is so vital to southwestern Ontario, co-chair of the non-partisan parliamentary committee on palliative and compassionate care, and most recently, veterans affairs critic and deputy whip.

I hope that my presence in this House has increased the level of debate as much in passion and substance as it may have in decibels. It was a privilege to be here during such emotional votes as the one on Canada's access to medicines regime, advanced so capably by the Grandmothers for Africa, or during the battle for the Canadian Wheat Board and supply management.

I have learned and grown with each posting, but never have I been more able to empathize with anyone as I have Canada's veterans. The absolute misery I have seen, particularly of those suffering from PTSD, and their caregivers, is beyond comprehension but cannot be beyond our willingness or ability to help relieve.

If I can make one partisan entreaty, and it should not even be partisan, it is that we must do more for our veterans. We owe them a sacred obligation for their service and for their sacrifice. That obligation must be as much a legal one as it is a conceptual one. Words do not suffice anymore. It is not enough to say, “lest we forget” on November 11. These women and men and their families need and deserve real action.

I am proud that I will leave a legacy here having passed a piece of legislation in Bill C-247, an act that will ease the lives of countless Canadians when a loved one passes away. My bill, which will receive royal assent any day now, will make Service Canada the single point of contact with the federal government for notifications when someone passes away. Our hope is that a personal representative of a deceased will need to only tell the Canadian government once of the death of a person, setting in motion all the necessary disclosures with the government to effectively deal with the affairs of the deceased.

That an MP in the third party could pilot a piece of private members' business through the House and the Senate is no small feat. I owe my colleagues in every party a great deal of thanks for seeing the virtue of this piece of legislation and passing it almost unanimously.

I owe a great deal of thanks to Bryon Wilfert, who originally introduced the bill. It was also my privilege to work with the member for Portage—Lisgar in her role as the Minister of State for Social Development to further develop this bill. I thank her for her work in getting the bill through cabinet and the government caucus. That I can point to that law and demonstrate what we have accomplished here as a Parliament for the betterment of all Canadians fills me with pride.

If I can leave with one final thought, I ask that you take the initiative to make this place and our work here more family friendly. Countless Canadians have incredible contributions to make to this place and public discourse, but are rightly concerned about the strains that this place will put on them and their families.

This is a job that is never done. There are no weekends or evenings to retreat to for quality time with loved ones. My marriage was a victim of the toll this takes on a family and relationships with loved ones, and I am by no means alone.

We have an opportunity to consider new ideas, and I urge this chamber and the members returned here after October to do so. I urge them to consider new ideas like alternating sitting weeks so that two weeks are spent here and two weeks are spent back in the riding every month. It is a more efficient use of our time and that of our Ottawa staff, and enables a better routine with our families from whom we will not be separated for long periods of time. I and others felt the difference this last spring when there was a two weeks on and two weeks in the riding interval. It is a problem that must be tackled if we want to help serve Canadians better with members living healthier family lives.

Remote voting should also be considered. We no longer live in a time or place where communication is so difficult that we all must gather here to be heard. Let us modernize and take some of that burden off the families back home.

Finally, I want to thank my staff, without whom this work would not have been possible. Brenda, Lianne, Shanice who ran the Guelph constituency office, and Kim, Matt, Kyle, Ari, Liz, Jeff and Dan who worked in the Ottawa office, all did so with such professionalism and care. They were my front line, who received the concerns of Guelphites and worked tirelessly to make sure they were taken care of.

This has been an incredible opportunity, and I say goodbye knowing that I never had nor will I likely ever have again the opportunity to serve in such a privileged yet humbling, effective and rewarding calling as being the member of Parliament for Guelph, the most beautiful, caring and compassionate city in all of Canada. I will always be grateful.