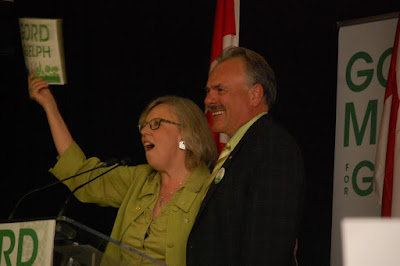 The final piece of the electoral puzzle, at least so far as the major party candidates are concerned, fell into place last night when former Environmental Commissioner of Ontario Gord Miller was acclaimed as the Green Party of Canada candidate for the Guelph riding in this fall's Federal Election. Miller was running unopposed, so his victory was a foregone conclusion, but the meeting was still an occasion because of the presence of not just one, but two Green Party leaders, Ontario leader Mike Schreiner and federal leader Elizabeth May.
On a rainy night in Guelph, about 100 local Green Party supporters gathered in the increasing muggy Red Chevron Club on Elizabeth Street to hear from Miller and May. In his nomination speech, the former environmental watchdog touted his history in Guelph, from his time at the University of Guelph, to meeting his wife here, to setting up his first business and starting a family in the Royal City.
"No question, it's the Green history," Miller told me as to the attraction of running in Guelph. Although it's been years since he lived here, Miller's experiences at the U of G, and his involvement in groups like the Puslinch Roadside Heritage Tree Society and the Chestnut Tree Society, give him deep roots in the community. "All those sort of green established things have affected my life all the way through so it's sort of a homecoming in that respect."
In his speech, Miller pushed both the need for environmental issues to be fought seriously and immediately, and that the Green Party can be a serious and centrist alternative to the main parties.


As to why he'd come out retirement as a civil servant and now run was a politician, he credits two people: Elizabeth May and Stephen Harper. "I don't need a job," he said. "I'm running to win this seat, to go to Parliament and change what Stephen Harper has done with this country."
The first person he mentioned, Elizabeth May, took the stage after the votes were counted. Her message was simple, a Green victory in Guelph is not only possible, but it's likely if local Greens can get out the vote.


As for his chances in the upcoming election, Miller, like May, is optimistic."It's not as hard as you think," he explained. "Elizabeth alluded to the robocalls [that] have tainted the Conservatives, not the candidate, but the campaign, the party. The NDP, as good as the candidate is, is not a strong party here.
"Really it comes down to, are the people of Guelph going to go with another Liberal, or are they going to go with an alternative," Milled continued. "I think we can present ourselves as the balanced centre of the political spectrum and a real alternative, one that can be effective and a good voice in Parliament and we'll leave it up to Mr. Trudeau to see how well he does."
The evening end with a special treat, a cake to celebrate the dual birthdays of May and Schreiner, which both coincidentally fall on June 9.