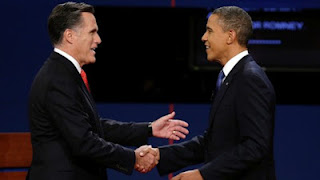 Well that was painful to watch. Even Barack Obama's political foes had to admit that during last night's presidential debates, the president wasn't playing at par. Will there be a long term impact on the campaign? Has Republican nominee Mitt Romney stopped the slide after weeks of bad press? And just what the hell was that format? Let's break it down.
Romney: Let's be brutally honest, any result that didn't have the former Massachusetts Governor picking up his teeth off the ground was going to be a win. The fact that he was on his game and seemed to hit hard at an unprepared and overwhelmed Obama beat the spread. Romney was able to pontificate his talking points and present them well. If Romney fell down anywhere it was his insistence that Big Bird had to go. Not only did that line spawn a hundred fake Twitter Big Bird handles, but it was a reminder that despite Romney's insistence that he's looking out for regular Americans (the 47 per cent?), he's still playing ideological games. Conservatives don't like PBS, so in discussing what parts of the budget they'd cut to save money, they point out the line item that takes 0.000016ths of a per cent of the total federal pie.
Still Romney looked like her was ready to play, he was prepared and even those much talked about, rehearsed zingers seemed to serve him well. But how much did Romney lay on prep for this debate? The topic, domestic affairs and economy, were his to loose, but how will he fare on foreign affairs and in a townhall-style format where Obama clearly has an advantage on both counts, and will he be able to put the kind of prep and concentration that served him last night into those last two debates?
Obama: It's not that he was bad per se, and it's not historically unprecedented that an incumbent comes out rusty in the first debate. The Obama campaign has been trying to go on the offensive today through speeches and social media platforms, but even the president's ardent supporters were saying today that it was too little, too late. If Obama has one thing going for him is that this was the first of three debates, so the lackluster performance in this initial face-off may be washed away after two more, especially when one will deal with Obama's strongest area as POTUS: foreign policy.
Unfortunately for Obama, the narrative for the next couple of newscycles will not just be Romney's survival post-debate, but his potential rejuvenation. Not once in the debate did Obama call out Romney on the leaked Mother Jones video where the Republican nominee wrote off half the electorate as moochers he couldn't reach, and many of Romney's talking points, like the aforementioned value added to the federal budget with the elimination of PBS funding, went unchallenged. Obama got in a couple of hits in the third half hour, including deriding Romney for an earlier gaff about students in need of college loans just asking their parents for money in lieu of student loans, but by then it was too little, too late. Obama tried to win on the buts and bolts of what's gone wrong the last four years and why he hasn't been able to address it fast enough, and all the while Romney was hitting him with spitballs.
In the meantime, unless there's another Romney campaign gaff in the offing, it will be a week till the Vice-Presidential showdown between Joe Biden and Paul Ryan; a week until the game can change again.
The Format: Yeah, what was that? Even from the beginning, when Jim Lehrer explained the rules, I had no idea exactly what the expectations were or what the debate would look like. It turned out that it looked like a free for all, and that's kind of what it was. Rebuttals seemed to be awarded randomly, but failing that the candidates seems to be able to jump in whenever they pleased, go over time, and even tell moderator Lehrer that he could wait a minute while they finished up whatever point they were making. Meanwhile, Lehrer himself looked like Grandpa Simpson as he repeatedly asked the candidates how he could tell the difference between. One almost thought that Obama and Romney should have been wearing name tags. Hopefully the next debate moderator will lay out rules that make sense and enforce them, and the result won't be another gong show. Maybe Romney had a point about firing Jim Lehrer after all...
Posted by Adam A. Donaldson at 7:25 PM