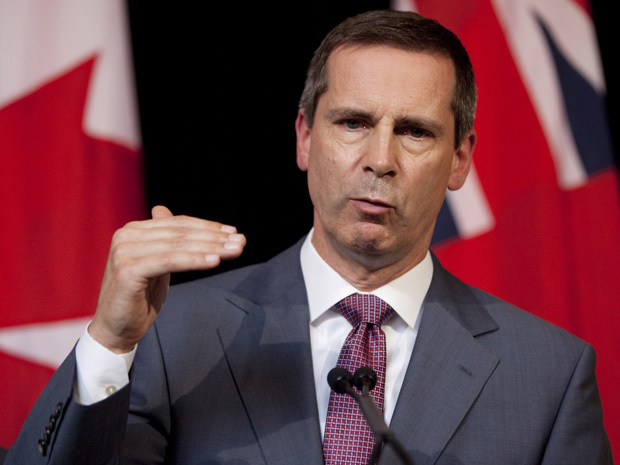 Dalton McGuinty's resignation as both premier and Liberal leader yesterday was surprising for its timing, if not necessarily for the fact that McGuinty would want to step down after nine years as premier, and nearly 17 as leader.
But McGuinty leaves under a cloud, not just the recent political loss of the by-election in Kitchener, and not just because of the compounding scandals including ORNGE and the power plant cancellation. The news of his resignation came with the news of the proroguing of the Ontario Legislature as well, which, while being a legitimate parliamentary tool, has become under recent minority governments a way to duck and cover till the heat from a controversy dies down. In other words, McGuinty's taking the coward's way out.
And if there's one thing that McGuinty doesn't need at the moment, or any moment for that matter, it's another reason his critics can jump on him. Teachers, tax payers, consumer advocates, even people who just want a relative state of electoral calm aren't fans of the Premier now, let alone the usual partisan politics. So while it's the perfect time for one man to take his bow, the legacy of his party will take the hit because of it. And this is not a great time for the Liberal brand to take another hit with a Federal leadership race, the recent loss of Quebec and a surely pending loss in B.C. next year, there was already an uphill climb, and many thought McGuinty might be the future, but I guess that's out the window now.
So what will McGuinty's legacy be? In two words: "Premier Dad." While history will be the final judge of McGuinty's stewardship of the economy, whether he was fiscally irresponsible or caught up in the slow death of Ontario's once fertile manufacturing sector, he's left an indelible impact on healthcare and education. Despite the recent hiccup with teachers' contracts, McGuinty and his government re-invested heavily in the public education system. He also put money back into healthcare, and has weathered many conflicts in the process be it independent pharmacists, e-Health or the spendthrift ORNGE executives.
But looking back, one of the paradoxes of McGuinty for me is the hate. Even people that like McGuinty can't cop to loving him, and people who hate him really hate him. But why, I ask myself. He received two fairly overwhelming majorities, and even his minority was a slim one of 53 seats, just one shy of a majority. I've heard people call McGuinty "useless," that he has "no ideas," and will "say anything" to the electorate in order to win the vote. First of all, how is that different from any other politician in the 21st century, and second, I think it comes from a bizarrely pragmatic place.
That's the thing: McGuinty is a pragmatist. He's not an ideologue in that he'll believe in something despite overwhelming proof to the contrary. Indeed a lot of people's disillusion with McGuinty came from his first budget in 2004, when he introduced the health premium and other new revenue streams (or tax hikes if you like), immediately following the revelation that despite the recent economic boom, the provincial books held much more hidden debt than the recently outed Progressive Conservatives wanted people to believe. Although McGuinty signed a pledge not to raise taxes - a mistake in my view as it ties one metaphorical hand behind your back if you're the head of the province's government - he saw the realities and did the right thing by saying that if more money were to go into the system, it would have to come from somewhere.
Was McGuinty perfect? Absolutely not. his recent fumbles are galling considering they were performed by a typically shrewd politician. But in the case of Premier Dad, if that be his legacy, then the long view of McGuinty will mirror the typical relationship we all have with our fathers: when they're with us, we take their advice lightly while secretly thinking they're always just an old timer who doesn't get it, only to see later on with age that they were more right than we knew at the time. A long shot I know, but then again so were three straight McGuinty election victories.
Posted by Adam A. Donaldson at 6:30 PM