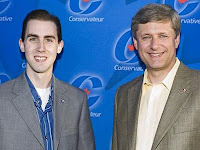 It appears that Michael Sona has shirked all national media - newspapers, TV shows and newsreels (that last one might be apocryphal) - in order to clear the air with, of all things, the University of Guelph student paper, The Ontarion.
Now that's not a knock against The Ontarion, it's bred many a fine journalist over the years, myself included. But surely Michael Sona - that is the same Michael Sona that was communications director for the Conservative Marty Burke campaign in last year's Federal Election, a campaign during which Sona guarded his candidate from the local media like one of the 300 Spartans facing down the army of Xerxes - wouldn't go to a local media source to tell his story, right?
Apparently, I was wrong.
In a sit down with Alicja Grzadkowska, Sona talked about his first hand experience regarding a kerfuffle at an advanced poll on the U of G campus last spring, and his being outed as the election fraud scofflaw Pierre Poutine. To be candid, the interview isn't so much memorable for what Sona said as opposed to the fact that he said anything on the record. You can read the article for yourself, but when I saw this little beauty pop up on Twitter today, I could have done a spit take (if I had, in fact, been drinking anything at the time).
Still, I have a hard time believing Sona's innocence. At the very least, he was culpable in a campaign of silence while working for Marty Burke. As communications director he executed a campaign of stealth where the only ones who got access were those that already agreed with his candidate, his party and his ideas. He allowed his man to shirk debates, be slow and/or unresponsive to media requests (and yeah, I know I beat that drum a lot, but most candidates can't get enough press exposure, not actively try and avoid it), and generally seemed that they had a presumption of victory and thus didn't need to try and convince people to vote for them.
I also remember my first brush with Sona. As Editor-in-Chief of The Ontarion, back when Sona was President of the campus' Conservative organization, he submitted an article that was glowing in its appraisal of then Conservative candidate Gloria Kovach, never disclosing that he had an inherent conflict of interest. I should have known then that Sona had in him the right kind of "moral flexibility" that could be nurtured under the right circumstances. Again, not to say that Sona had anything to do with robocalls and "Poutine," but it's almost that much easier to see why Sona might appear to be the man behind the proverbial cheese curds. As it were.
Is there something a foot in this? Why is Sona now talking to the media, starting with The Ontarion? Although I never believed that Sona was Pierre Poutine, or that he was the sole perpetrator in the events now called the robocall scandal, the timing is interesting. Then again, Sona maybe in earnest. He has a right to clear his name, and it really does seem like no one else is going to do it for him. If you want something done right, huh Michael?
Posted by Adam A. Donaldson at 10:53 PM