The City Takes Back Its SLAPP 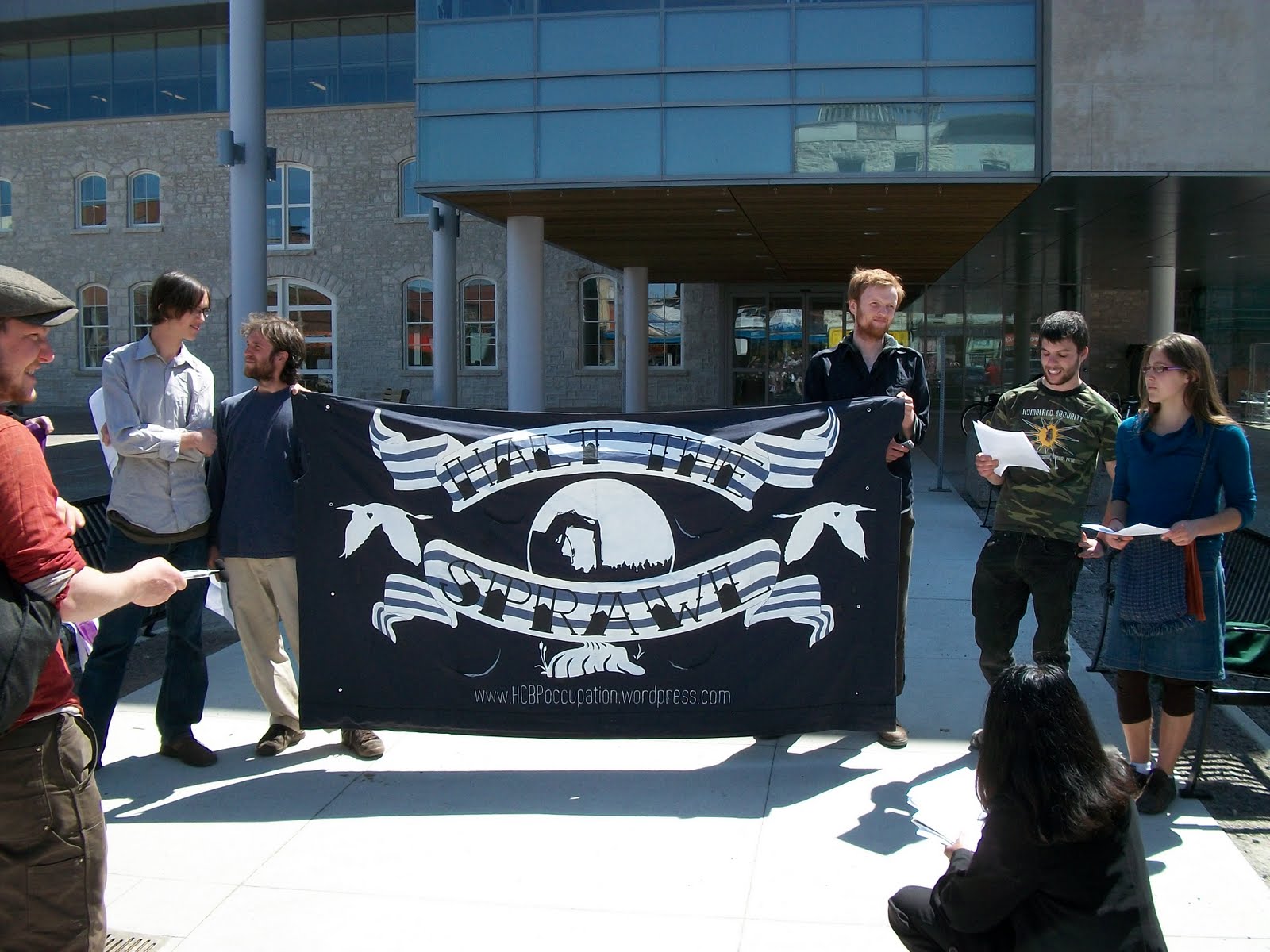 The last year's hardly been productive for local activists. Between the arrests at the G20 in Toronto last summer, and the lawsuit against five so-called ringleaders of the Hanlon Creek Business Park protest the summer before, let's just say the thirst for direct action has become practically non-existent. And like the mass arrests in Toronto during the G20, it seems that Guelph authorities are now acknowledging that maybe, they went overboard.
The Guelph Mercury reported yesterday that the City has dropped a lawsuit brought against Cailey Campbell, Matt Soltys, Josh Gilbert, Matt Lowell-Pelletier and Shabina Lafleur-Gangji, five people identified as the organizers of the Land Is More Important Than Sprawl (LIMITS)-led protest at the site of the HCBP in July 2009, has been officially dropped.
“The action was concluded on the basis that it was discontinued without costs,” Donna Jaques told the Mercury. “The notice of discontinuance has been filed with the court and the matter is now concluded.”
So basically the the suit has been called off and no one has to pay any court costs, or anything. It's as if it never happened. Except it did happen. The City of Guelph took five well-meaning young people to court and demanded that they pay $1 million a piece for their protest, an amount that they would probably never be able to pay back even 10 per cent of. And that's why it was called a SLAPP suit, SLAPP standing for Strategic Litigation Against Public Participation. Meaning that the city, in an attempt to dissuade anymore protests, took other protestors to court with a price tag so high that anyone thinking of starting their own protests will re-think the endeavour lest they themselves are SLAPPed.
“The city wanted to punish us with their lawsuit – after all, we made the city look terrible, and we set a Canadian precedent by winning an injunction that stopped construction,” Matt Soltys wrote in a Mercury column a few weeks ago. “But besides punishing us, the lawsuit was designed to scare away opposition to the business park.”
If you ask anyone at City Hall point blank if this was a SLAPP suit they'll probably tell you it was not, but in a comment to the Mercury, Ward 2 Coun. Ian Findlay more or less acknowledged it was. “It has now been two or three years since all of that went down,” he said. “There has been no further disruption, and it was determined that the costs were minimum to the city in the end. So we have withdrawn out suit against the protesters.”
Obviously, no one was going to protest with $5 million hanging over the heads of five others, and since 2009 sufficient ground has been broken on the site to make the ceasing of further construction not just counter-productive, but down right pointless. It turns out it's true: you can't fight city hall.
And thus ends a perplexing chapter in the so-called left-wing Guelph. And our left-wing City Hall, Mayor's Office and council. In the years to come, the SLAPP suit over the Hanlon Creek Business Park will be seen as the dividing line where Guelph's reputation as a granola-eating hippie paradise was disbanded for a more development-friendly, middle-of-the-road rep with the looney-left label a fleeting memory of our misspent youth. A warm memory of the people we used to be, and the principles we used to have. Myself personally, I thought the HCBP was a bad idea in 2009, and considering the hard time the city's had selling vacancies, it seems like just as bad an idea now.
In the future, we may miss the passions brought to the foreground by people like the LIMITS protestors. It's too bad that they'll be too afraid of being sued back to the stone age in order to do or say anything about it. Another win for democracy in the 21st century, I guess.
Posted by Adam A. Donaldson at 7:12 PM