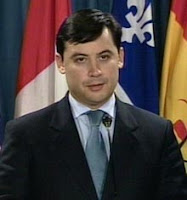 Here's a weird press release. Apparently, some activists have decided to occupy the Fergus constituency office of Michael Chong in protest of potential changes to Old Age Security. Chong is one of 21 Ontario Tory MPs being targeted with these protests, and an odd choice given Chong's reputation as a maverick in the Conservative Party, one of the few, rare non-partisans in the hyper-partisan atmosphere of Parliament Hill. Anyway, look at the press release below to get all the details about the occupation:
OCCUPTION UNDERWAY AT THE OFFICE OF HON. MICHAEL CHONG IN FERGUS, ON: Seniors, retirees and supporters demand that Tories protect public pensions

(GUELPH, ON) ─ A group of pensioners, soon-to-be pensioners, labour activists and supporters, angry at the Harper Government's announcement that it intends to cut Old Age Security (OAS) benefits, are presently occupying the Constituency Office of Conservative Hon. Michael Chong at 5-200 St. Patrick Street East, Fergus, Ontario. They are among hundreds of other seniors, retirees, workers and family members who have resorted to holding sit-ins at 1:00 pm today in 21 Ontario Tory constituency offices, to demand that retirees and seniors be elevated out of poverty.
“Our government should be supporting retirees and seniors, not greedy corporations,” said Janice Folk-Dawson, President of the Guelph and District Labour Council. “Harper is spending billions to reduce corporate taxes but he refuses to call on these same corporations to invest a fraction of their publicly-subsidized savings in pensioners. Only a minor increase in Canada Pension Plan contributions would double CPP benefits for all retirees and seniors.”
Outraged constituents have resorted to occupying their local constituency offices to demand that Conservative Members of Parliament abandon plans to push back the OAS eligibility age from 65 to 67, or reduce pension benefits. Instead, they are calling for the Harper government to introduce modest increases to Canada Pension Plan (CPP) contributions that would double benefits for all retirees and seniors.
“There is no excuse for Prime Minister Harper to cut the meagre incomes of pensioners or consign the working poor to two more years of poverty. Nearly every economist and the government's own Parliamentary Watch Dog, Kevin Page, are forecasting the long-term sustainability of public pensions,” said Ryan. “If Harper thinks that he can take on retirees and seniors in this country without a fight from the labour movement, he is sorely mistaken. Harper has touched the 'third rail' of Canadian politics and in doing so he has unleashed a labour and seniors movement of 'Blue-Grey Power' that is prepared to mobilize the public to defend the income security of the retirees of today and tomorrow.”
The occupation is taking place at 5-200 St. Patrick Street East, Fergus. For a full list of occupations currently taking place in Conservative MP constituency offices across Ontario, visit: www.OFL.ca
“We are bringing our frustrations directly to the office of the Hon. Michael Chong because the people in his community are outraged that his government is betraying his own constituents,” said Folk-Dawson. “The Conservatives have no mandate to attack the retirement security of all seniors and pensioners. Chong is going to have a fight on his hands in his own backyard.”
The OFL represents 54 unions and one million workers in Ontario. OFL President Sid Ryan is the voice of Ontario's labour movement.
Posted by Adam A. Donaldson at 2:06 PM