Postcards from the Ledge 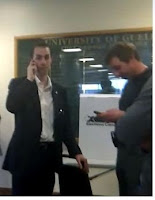 I think when you're in the midst of a political scandal, the last thing you want to hear is that you're so horrid a politico you actually caused a colleague to give up on the party they actually dedicated a lot of effort and energy into.
In the midst of everyone piling on our beleaguered native son Michael Sona comes a short and sweet letter to the Toronto Star from his successor as president of the University of Guelph Campus Conservatives. The letter speaks for itself, but is it a sign of things to comes, not just for Sona, but for the Conservative Party on whole? Time will tell.
A few months ago I was a card carrying Conservative, serving as a director on both the Guelph and Kitchener-Center Conservative electoral district association boards. I succeeded Michael Sona as president of the University of Guelph Campus Conservatives and I can tell you I deeply regret all the work I have done for the Conservative Party of Canada.
They have gone against Canadian values and have made a joke out of our democracy. I believed I was working for a cause to bring greater accountability, transparency and respect for the taxpayer; the result was just the opposite.
Canada is a great nation, built by a people who value hard work, taking responsibility for one’s actions and above all honesty. The government that sits in Ottawa values only power and cannibalizes its own in order to save face.
As someone who has seen what is talked about in the party, I can only say God help Canada in the next four years. Because it won’t be the country that veterans, like my grandfather fought so hard to protect.
Victor Pocaterra, Kitchener
Posted by Adam A. Donaldson at 11:02 PM