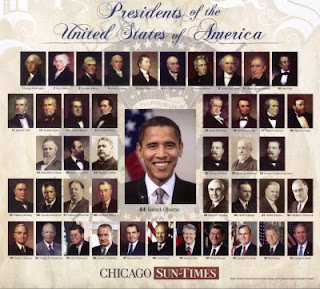 Just in time for President’s Day south of the border, a new poll came out ranking the Best and Worst post-war Presidents, and the Best Presidents of All Time. A Harris poll taken between January 16 and 23, 2012, asked 2,016 adults what they think of previous U.S. presidents. The results and my commentary are posted below.
1) "Looking at the list of presidents since World War II, which one do you think is the best president?"

Considering that a lot of the economic and foreign policy trends that stifle the United States were introduced by Ronald Reagan, it's a wonder why one in four think of him so fondly, but there it is. And I’d love to know which two per cent thinks that George W. Bush was a good president, or at least the two per cent who think he was better than his dad and Nixon, probably the two last sane Republicans to hold the White House.
2) "Looking at the list of presidents since World War II, which one do you think is the worst president?"
Bold. Ranking W. as the worst, followed immediately by Obama. Is this another indication of the partisan divide in the U.S., or do people down there just have a really short memory? You'll notice that Bill Clinton is in the fourth spot, meaning that the last three presidents chronologically are three of the worst. The only reason that Clinton didn't make the Top 3 was because 12 per cent remembered that they still hate Nixon.
3) "Which one of the following presidents do you think was the best overall president in our history?"
Lincoln I think we all get, but Reagan? Reagan is number two out of 43? He beats Washington, Kennedy, both Roosevelts, Jefferson, Truman, Eisenhower, Adams, and Wilson?

Let's rephrase that. Reagan, the man behind Iran-Contra, playing politics with the EPA, grant-rigging at HUD, scandals with Savings & Loans, blurring the lines between government and lobbies - not to mention being known as the god who walks by the American right despite his having raised taxes several times while increasing government spending ans still being known as a small government guy - beats all the following accomplishments amongst the previously mentioned men:
Yes, Reagan deserves to be known as the Best President in U.S. history, doesn't he? Him and that stove pipe hat guy. But what did he ever do?
Posted by Adam A. Donaldson at 7:56 PM