Now You Can Call Him "MPP Schreiner" 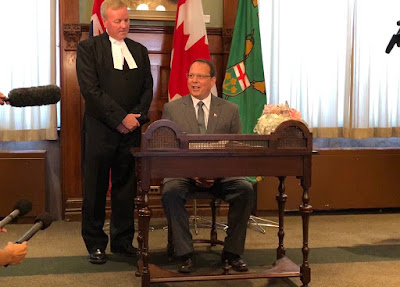 The election is long done, the work of preparing to govern has begun, but today history was official sealed with the swearing in of Green Party of Ontario leader Mike Schreiner as MPP of Guelph.


At 11am today, July 5th 2018, I swore my oath and became Guelph’s Minister of Provincial Parliament. Thank you to supporters, volunteers, staff, friends and family for all the work it took to get here. I am happy to share this honour with you, and I am excited to represent you. pic.twitter.com/qmOe1jiEj9
— Mike Schreiner (@MikeSchreiner) July 5, 2018


“I’m going to do politics differently. I campaigned on a promise to create jobs, put people and planet first. I’m going to keep fighting for that,” Schreiner told the media after his swearing in.
Schreiner won the Guelph seat in the June 7 provincial election with 45 per cent of the vote, the best showing for a provincial candidate in the riding since Brenda Elliott in the 1999 election. Since Election Day Schreiner has not rested on his laurels and has attended any number of community events, while keeping his promise to hold the new government of Doug Ford to account.
“Cancelling Ontario’s plan to price greenhouse gas pollution without announcing an alternative is reckless and irresponsible," Schreiner said in a press statement yesterday about the government announcement to cancel its participation in cap and trade.
"Ontario can address the climate crisis in a way that creates jobs, benefits our economy and leaves a livable planet for our kids and grandkids," he added. "Premier Ford is telling clean economy companies that Ontario is not open for business. I’m ready to work with the Premier on solutions.
Schreiner wrote an open letter to Ford on the matter to which he has not yet received a response.
In other news, Ford has announced that the Ontario legislature will be recalled on July 11, and that a Speech from the Throne will be read on July 12.
Posted by Adam A. Donaldson at 4:18 PM