Mlynarz Runs for Mayor, and Yes, She's In It to Win It 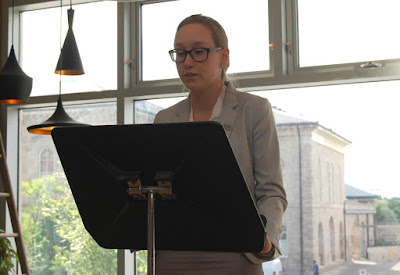 With nominations for the municipal election closing on Friday, Mayor Cam Guthrie had just over four days left before being acclaimed as the head of Guelph's city council for another four years. On Monday morning though, one candidate came forward to say "Not so fast", and she made it clear that she's not going to let you hold her youth and inexperience against her.


After filing her paper work at City Hall, Aggie Mlynarz talked to the press, supporters, and potential supporters on the second floor of the 10C Community Space. In her first statement as a mayoral candidate, he former NDP candidate stated that Guelph needs development polices that are "smart, sustainable, and conscientious of the resources we depend on everyday."
"We are entering the largest development cycle that the City's seen in decades and we need to be vigilante that a new vision of Guelph reflects the values that have come to give this city its unique character." Mlynarz said.
Mylnarz also called for the protection of water resources, and of the City's natural heritage including the dedication of park land. "Over the coming weeks, we'll need to ask ourselves tough questions in relation to development, to ask ourselves about what the cost of urban sprawl really is, and not just in terms of affordable housing, but the price it will cost public institutions and infrastructure," she added.
"Incumbents Need to Run on Their Record"
Mlynarz said that after failing to win the Guelph seat on the June 7 Provincial Election, she started thinking about running for local office, specifically for City Councillor of Ward 6, but she became frustrated seeing that one name listed under mayoral candidates.
"The lack of a mayoral race would have been a blow to our local democracy, issues must be debated, and incumbents must be forced to run on their record whether it's good or bad," Mlynarz said.
Although it sounds like Mlynarz is running on issues and accountability, she assured any doubters that she's ready to be mayor.
The "Experience" Question.
Sure, she's never held elected office, but Mlynarz somewhat surprisingly evoked Kate Quarrie as an example of when Guelph went with a politically inexperienced mayor. But why not run for council first?
"That did cross my mind, but I've had conversations with politicians with a lot of experience and they said that politics sometimes don't work that way, and that when you're presented with an opportunity, you need to take it," Mlynarz explained.
It terms of life experience, Mlynarz was asked how she will respond when asked on the campaign trail about running against a mayor who is an established professional with a family, and a mortgage.
"I want a mortgage, I want a family, and maybe I want children, and the future presented to me right now makes it very challenging to do so," she said. "I think yes, experience is helpful, but motivation is also a powerful force and a powerful drive, and I think that voice has to stand up in politics locally, provincially and federally."
Mlynarz also assured that she has the financial backing to make a run for mayor, and will be bringing in a friend from Toronto to manage her fundraising efforts.
On the Issues.
When asked what she thought the three main issues of the campaign will be, Mlynarz said development, environmental protection, and city finances. On that last point, Mlynarz said that she'll be looking to review the council-approved raise to the mayor's salary, noting that it was done despite the recommendation of the Council Remuneration Committee to leave it how it is.
Mlynarz said that her platform will try and balance her aspirational world view with the practical considerations of running a city. "We do need to be sensitive to taxpayers dollars, we pay more than enough in Guelph, and we need to be respectful of that as well," she said.
She added that the full platform will be released on Tuesday September 4.
On the broader question of consensus building, Ward 4 Councillor Mike Salisbury, who's occasionally been at loggerheads with Guthrie at the council table, asked Mlynarz about how she would work with the whole of council as mayor.
"We always have to move to the centre, try and pull as much as we can from different directions," she explained. "It might even be helpful to have someone with an outside perspective come in and sit on council who doesn't have relationships with other councillors and be able to offer that fresh perspective, and jump in to work across lines and get people on the same page."
What's Next?
Mlynarz said that she and her team will be meeting Guelph voters over the next several weeks and developing a platform that will reinforce "progress, equality and prosperity."
"I want people to know that I'm a fighter and that I'm not done fighting," Mlynarz said. "The fact is that just because the provincial election cycle ends, it doesn't mean the issues are off the table, and I do believe that local politics are incredibly important from this perspective."
Posted by Adam A. Donaldson at 11:04 AM