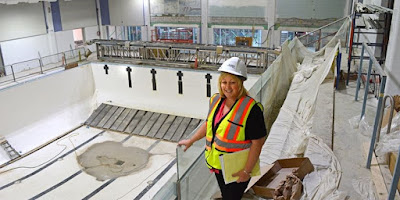 June is Parks and Recreation month in Ontario, and Guelph is marking the occasion with a variety of activities at its various open spaces and indoor facilities. For the last year though, the City has been one rec facility short though, but not for too much longer.
The Victoria Road Recreation Centre has been undergoing extensive renovations this last year, a 21st century facelift for a building that was first opened in 1974 when accessibility was barely a requirement for new buildings. While it's not completely correct to say that what's happened at Vic Road is a knock down and rebuild, it's safe to say that when people start heading into the centre once again on the weekend, they might not recognize the place.
The person overseeing all this is Heather Flaherty, the general manager of Parks and Recreation for the City of Guelph. She's been on the job for a couple of years, and this is, by leaps and bounds, the biggest project she's supervised as GM. On this edition of the podcast, I talk to Flaherty about the changes and upgrades at the Victoria Road Rec Centre, and we talk about her job as general manager. What does a day in the life of Parks and Rec in Guelph look like? How does she balance the  recreational demands of the people of Guelph? What are the challenges of the department?
On top of that, if you're wondering about progress for a South End Recreation Centre, you will have to stay tuned because an update on that project is given in this podcast. So let's head over to the Victoria Road Recreation Centre and hear all about it in this second episode of the week of the Guelph Politicast. (And after you're done listening, scroll down to see an early behind-the-scenes look at the Rec Centre.)


You can learn more about what Parks and Rec has to offer at the City's website, and you can attend the grand re-opening of the Victoria Road Recreation Centre at 151 Victoria Rd N on Saturday June 24 at 11 am.