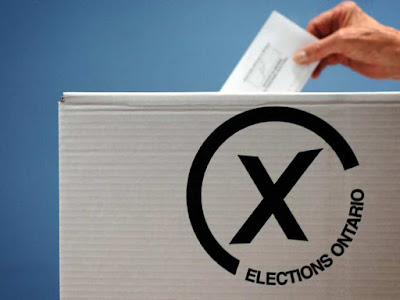 There's been a lot of talk about electoral reform on a federal level and on a municipal level lately, so why doesn't the province join in on the fun, albeit on a smaller scale?


The Ontario government announced yesterday that it was introducing the Election Statute Law Amendment Act, which, if passed, will enact many of the recommendations of Ontario's Chief Electoral Officer. The goal is to modernize the elections process, provide clearer rules to candidates and voters, and to increase voter participation and "improve the voting experience." On that point, the government is hoping to address the concerning statistic that barely half of the eligible voters in Ontario turned out in the last election, especially troubling is the very low turnout among young people aged 18 to 24.
"In the last provincial election only 34 per cent of young people voted – we need to do better," said Attorney General and Government House Leader Yasir Naqvi in a statement. "In the next general election I want to see more young people cast a ballot, which is why I’m very excited that this legislation would allow 16- and 17-year-olds to pre-register to vote."
Allowing teens to pre-register two years before they're legally allowed to vote is indeed one of the new provisions in the amended law, which will also allow for the use of electronic vote tabulators to make the counting of ballots quicker and easier. The standing election day will also be moved from autumn to spring in order to "take advantage of the longer daylight hours and warmer weather." It's a practical move considering that Election Day 2018 for the province would have only been a couple of weeks before the Election Day for most municipalities across Ontario.
In other changes, the northern most ridings in the province may be increased in number from 11 to 12 or 13; the Far North Electoral Boundaries Commission could recommend that either Kenora-Rainy River or Timmins-James Bay or both could be divided to create new ridings. "These proposed changes would help engage our young people in the democratic process, promote greater voter turnout by making it more convenient to cast a ballot, and look at ways to improve representation of people living in the far North," said Premier Kathleen Wynne. "These changes, which would implement several recommendations made by the Chief Electoral Officer, are part of our commitment to a modern, fair and effective Ontario electoral system."
Posted by Adam A. Donaldson at 11:30 AM