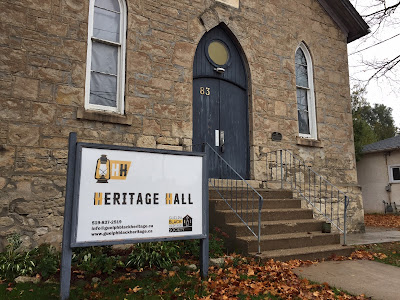 It wasn't too long after Upper Canada was established at the turn of the 19th century that the white settlers loyal to England started being joined by the Black slaves from the newly minted United States looking for somewhere they can be free. After Guelph was founded in 1827, the British Methodist Episcopal Church became a beacon, a safe space, for those people on the road to freedom along the Underground Railroad, and the Guelph Black Heritage Society want to reclaim that history.
On November 4, the Guelph Black Heritage Society is holding a kick-off celebration for a fundraiser called "Rampin’ It Up!", an effort to raise $47,000 to create a new accessible entrance at Heritage Hall, the cultural, historical and social community centre at 83 Essex St. The event at the eBar, 41 Quebec St, is a licensed event featuring live music by The Things followed by DJ Charless Janzen starting at 9 pm. Tickets in advance are $10 and $15 at the door.
So for a little context, this week's edition of the Guelph Politicast goes down to Essex St and Heritage Hall and talks to BHS member and local realtor John Leacock. Leacock was one of several people that came together to make a case to buy the Heritage Hall and preserve its place in local Black history. But that was only the beginning of his plans for the old BME church, Leacock envisions a place that's not just a remembrance of things past, but an invitation to where all communities within Guelph can go in the future, and it has to begin by turning the Heritage Hall into an accessible place for everyone.
So let's go to the crossroads of the past, present and future at Heritage Hall in this week's Guelph Politicast.

Not having even gotten to the interview itself, can we start with some basics: Long "after Guelph was founded", that BME was built in 1880, the wooden one on the same property was built in 1870, the BME of Canada was created in 1856 out of the African ME (American black Methodists invited into Upper Canada in the late 1820's by white Methodists.) Which makes Guelph's involvement with black methodists about 30 years after Guelph was founded. (Though Thomas Sandilands who built the building now housing the Cornerstone, arrived in the 1830's and was part of the Scots Anti-Slavery Society of Canada in 1851, representing Guelph, so presumably he was active. The earliest AME in the area was in the Queen's Bush Settlement just north of Floradale in what was then Peel township (now part of Mapleton.) Upper Canada was created in 1793 not in the 19th century.