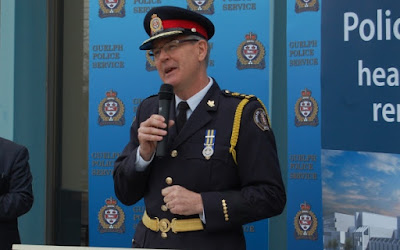 What began as an experiment to get the city's politicians on the show, has expanded into other areas. Like policing. In an effort to expose out listeners to the myriad of voices that make a difference to our lives in Guelph everyday, back in June we invited the police chief onto Open Sources Guelph, which might have marked the first time the police was intentionally invited into CFRU.
On the June 30 show, we were joined by Chief Jeff DeRuyter of the Guelph Police Service. Chief DeRuyter has made a career of policing in Guelph, starting as a beat cop in 1984 and working his way up the leadership of the service until he became chief in March 2015.
With a career of long-standing service in Guelph, Chief DeRuyter knows his town, even if it sometimes seems like Mayberry thanks to one of the lowest crime rates in Canada. Still, by Guelph comparisons it's been city under siege time with cold-blooded murder and acts of shocking violence having occurred over the last year, from a northend hotel to the General Hospital. These are rather shocking crimes for our fairly laid back little town, and we got DeRuyter's opinion on whether the perception of Guelph is safe is fracturing.
We also talked to the Chief about drug abuse downtown, repeated theft from unlocked cars, and speeding issues, along with sunnier matters like the Special Olympics, which were held earlier this year and were hosted by the Guelph Police Service, as well as the serious renovations being done at Police headquarters.
So let's catch up with the Chief, and flashback to Jeff DeRuyter's appearance on Open Sources Guelph on June 30.