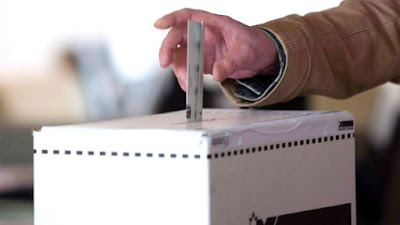 You might have heard a lot of discussion in the news about electoral reform, but what is it, what are we reforming, and what are we reforming it into? All good questions that also have the virtue of not being easy ones to answer as well. This is the podcast that, at least initially, aimed to answer those questions, but if you're not sure where to begin on electoral reform, then this is as good a place as any to start.
This week's Guelph Politicast comes in advance of "Vote for Canada,” a Fair Vote Guelph event being held at 7 pm on June 28 at Hope House. Two experts - Prof. Dennis Pilon from York University and Prof. Byron Weber Becker from the University of Waterloo - will talk about Proportional Representation (PR) with Pilon discussing the Mixed Member Proportional System (MMP), while Becker will wax on about STV, the Single Transferable Vote System. There will also be a short question and answer session.
The following Q and A session is between myself and Steve Dyck and Ken McKay, two of the organizers of Fair Vote Guelph. Electoral reform's been on my radar for a while, and it's a topic that has a lot of traction in Guelph, which has had many people working hard on the issue since the robocall incident in 2011. The general feeling being that a less partisan Parliament - less dependent on winning a few bell-weather seats to achieve majority government status by tapping out at 39 per cent national support - would mean less illegal shenanigans to encourage people not to vote. Oh yes, and it will also help to create a more democratic country that better reflects its citizens and bring Canada in line with other western democracies that already use some form or proportional representation.
In our discussion, we talk about the problems with the present form of voting, First Past the Post (FPTP), the various forms a PR election might take, what's involved with developing and enacting those forms, how the public might get better educated about them, why previous referendum votes to move to PR have failed, and what effect the move to ranked ballots on the local level might have on the broader discussion.
So let's get the discussion started. Electoral reform - why we need it, and what does it mean - this week on the Guelph Politicast.


For information about the fight for electoral reform, you can visit the Fair Vote Canada website here, and if you would like to learn more about local efforts, or get more information about next week's event, you can email the Guelph chapter of Fair Vote at guelph@fairvote.ca.
The theme music for the Guelph Politicast is from the KPM Klassics collection by Syd Dale.
The host for the Guelph Politicast is Podbean. Find more episodes of the Politicast here.
Remember that the Politicast Podbean channel is also the host for podcast versions of Open Sources Guelph. The previous Thursday's episode of Open Sources will be posted on Mondays.
Stay tuned for future editions of the Guelph Politicast!
Posted by Adam A. Donaldson at 1:20 PM