Stephen Harper is living the dream, and that dream belongs to a Canadian actor. The Huffington Post Canada posted some pictures from next week's episode of the CityTV retro crime series Murdoch Mysteries, otherwise known as the one with Prime Minister Stephen Harper.
In this episode of the series, the PM plays a hapless desk Sergeant that doesn't recognize then-Prime Minister Wilfred Laurier when he walks into the police station. Murdoch Mysteries follows the adventures of Insp. William Murdoch, who solves crimes in Victorian Toronto using then revolutionary forensic science.
I may not agree with the Prime Minister's politics, but I've got to admit he can play things pretty cool. Harper has also appeared on the Canadian sitcom Corner Gas, and been a guest on political sketch shows like This Hour Has 22 Minutes, Rick Mercer Report and Royal Canadian Air Farce.
Murdoch Mysteries airs Wednesday at 10 pm on CityTV. 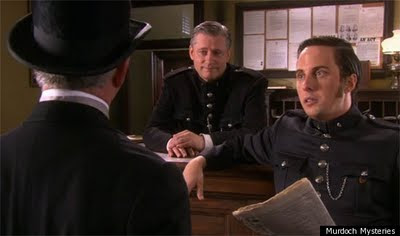 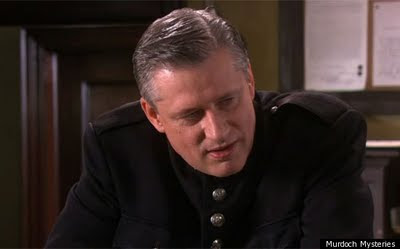