LISTEN: Chong and May Talk about Government Reform and Turning Parliament Inside Out 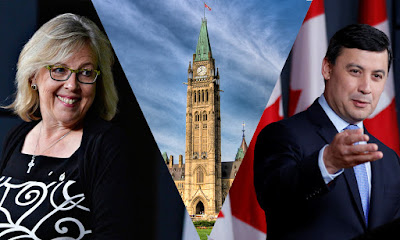 As you may have heard, electoral reform is a hot button issue in Guelph, which is why when Fair Vote Guelph decided to bring a couple of high-profile federal figures to town to talk about it, a few hundred people were interested in hearing what they had to say. So if you happened to have missed the talk featuring Green Party of Canada leader Elizabeth May and Wellington-Halton Hills MP Michael Chong on Tuesday, this is your chance to hear it. And if you did happen to the be there, this is your chance to hear it again.

In conjunction with the release of a book of essays called Turning Parliament Inside Out: Practical Ideas for Reforming Canada’s Democracy, which was co-edited by Chong, the two federal politicians came to Guelph to talk about improving our democracy; May on the virtues of electoral reform, and Chong on his pet topic, parliamentary reform. Together, they demonstrated that though we all have our political differences, even on these specific issues, there's still a lot we can agree on, and what we can agree on here is that change is needed to bring power back to the people.
The entire session was about two hours along, but what you'll hear below is more than the first half of the evening, remarks by Chong and May, and then a question and answer session with audience members. Enjoy!

***Special thanks to Scotty Hertz for attending the event and collecting the audio!!!