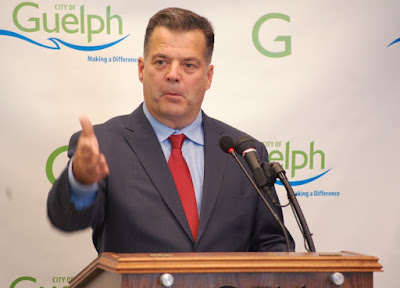 You could cut the giddiness with a knife this afternoon at city hall as the results of the Strategies and Options Committee's search for a potential merger partner with Guelph Hydro has bore fruit. If everything goes according to plan, then Guelph Hydro and Alectra Utilities will merge in the near future, with a completed deal coming before council for a vote in mid-December.


In an announcement that included Mayor Cam Guthrie, Chief Administrative Officer Derrick Thomson, and Alectra President and CEO Brian Bentz, it was revealed that Guelph has signed a memoranda of understanding with Alectra to begin formal merger negotiations that will be lead by Thomson. The goal is to have all Ts crossed and ready for a council vote before the end of the year.
All parties agreed that this was the perfect marriage of two like-minded utilities.
For Guelph, the merger promises customer savings, reliable service, a new Green Energy & Technology hub in the city, and the promise that this will still be a community-based utility that will remain immediate and responsive to customers in Guelph and Rockwood.
For Alectra, which is the combined local distribution companies Enersource, Horizon, PowerStream and Hydro One Brampton, teaming-up with Guelph makes sense as their corporate goals align. In their statement, Alectra says they're committed to working with Guelph's climate change officer, to help foster the development of green energy tech, to support the Community Energy Initiative, and to "preserve and enhance community presence."
In case your not a hydro nerd, Alectra covers 13 different communities from Barrie to Hamilton; Brampton and Mississauga; Alliston, Beeton, Bradford West Gwillimbury, Penetanguishene, Thornton, and Tottenham in Simcoe County; and, Aurora, Markham, Richmond Hill, and Vaughan in York Region. It's 13-member board includes 12 municipal representatives including: three from Mississauga, three from Vaughan, two from Hamilton, two from Markham, and one each from Barrie, and St. Catharines. How Guelph will fit into this structure is to be determined.
Still, it's worth noting that Alectra's own merger was only finalized earlier this year. So why dive into another big merger so soon?
"In terms of the merger of Alectra, that merger was in the works for almost three years," said Bentz after the presentation. "We're in very good shape in terms of the integration process. When we look at a transaction, especially a partnership like this, it really is around alignment in terms of our values and whether there is benefits to consumers, and in this case there really is."
"There was a lot of interest in merging with Guelph Hydro, and I think you heard today why that is because of the community, because of the leadership it shows on how it operates, and because of sustainability, so we were very interested seeing this partnership develop, and we're very excited that it has," Bentz explained.
"We kept coming back to the core values from the community, which was jobs, rates and innovation, and that was really our filter as we started going through the process," added Thomson. "What stood out really quickly for us was Alectra, and when we started talking to them and working through what the committee would recommend to council was the investment in the Green technology hub, which is very exciting, and we look forward to cementing that through the negotiation period."
Thomson said that the negotiating period will likely be an "intense"one, but there will be lots of opportunity for public engagement. "We're very proud of work we've done on engagement on this topic," said Thomson. "There will be lots of opportunities for the community to ask questions and have their questions answered, which has been immensely important to us throughout this process."
The last couple of council meetings concerning SOC and potential Hydro mergers have been behind closed doors though, and the fact that there's an agreement in principle so quickly might likely come as a surprise to those that don't live and breathe city politics. The mayor said that transparency and openness are always front of mind on this portfolio.
"We have been extremely transparent purposefully on this process," explained Guthrie. "Not only have we been transparent, we've used the input from the public process to guide us to this moment today, and we're not stopping. Equal weight is being given to public input between now and December."
So it's not a done deal, obviously, and no, you will not start to see Alectra trucks rolling around Guelph after the new year. In fact there's no word that the new entity will even be called "Alectra" by the time the merger goes into effect, all that will be up for discussion, says Bentz. After Guelph council approves the merger, Alectra's shareholders will have to approve the deal too before it goes on to the Ontario Energy Board for final approval, which could take up to a year. Bentz said consumers will likely start to see changes in a couple of years.
In the meantime, council's vote on merger will take place on December 13. City staff promise to keep the public update on all the latest developments through the Energizing Tomorrow website.