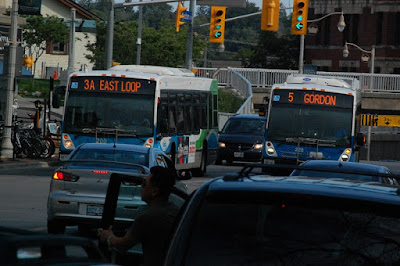 One-hour holiday service, no peak service in the summer, the cancellation of Free Ride Fridays with the Storm without notice, no service expansion for 2017, the firing of manager Phil Meagher, no restoration of 2015 service... This was not a good year for transit in Guelph, and probably not the plate you want set for you when you sit down at the desk as Guelph Transit's new General Manager.


Still, this was the portfolio that Mike Spicer was handed when he was hired as Guelph Transit's new GM last month. An experienced city employee who came up through the transit ranks in Brantford and Burlington, Spicer now arrives in the Royal City at one of the trickiest times in local transit history. He will experience pressure at both ends, from a public eager to see service expansion and a senior staff and council looking for fiscal efficiency; two years of planning for an expanded service and new schedule was put on indefinite hold as Transit is one of three subjects to endure the pilot service review process.
In other words, there's a lot to talk about. I got the chance this week to sit down with Spicer, live and in-person, to chat about his expectations for the job of running Guelph's public transit, what his understanding of the City's expectations are, and how he might address the concerns of the greater public. On top of all that, he has to work to find a way to get more people on the bus, while convincing council that Transit can't afford anymore cuts. Yes, Spicer says for the record that he's not in Guelph to cut service, and he's not here to privatize it either. (You may all now breath a sigh of relief.)
So on a cold December morn', this poor podcaster made his way to Watson Rd. to talk turkey with the man who will guide the future of public transit in Guelph, and transit nerds just might enjoy his vision.