CSA Re-Opens Vote to Determine Fate of the UPass 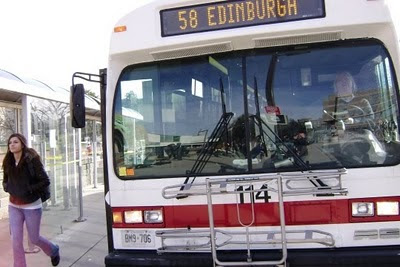 With the fate of the University of Guelph Universal Bus Pass (UPass) in the balance, the Central Student Association at the U of G is reopening voting tomorrow (Wednesday) in an effort to meet quorum and approve of the new cost structure, phasing in a $50 increase over five years.


In the annual CSA election earlier this month, voter turnout tapped out 14.7 per cent, enough to affirm the vote for all the candidates for student government, but quorum for referendum questions is 20 per cent. Two other referendum questions, one asking the University to divest from fossil fuel companies that passed and a fee increase to Guelph Resource Centre for Gender Empowerment and Diversity (GRCGED) that did not pass, also failed to meet quorum, but the UPass question had the added urgency of the fact that the current contract between the CSA and Guelph Transit expires Friday. So what was going to happen to the UPass? Will it continue at the same rates? Be pulled completely?
"Currently things are quite up in the air, there are a few different conversations that need to happen in order for me to provide these answers," Scarlett Raczycki said to me by email yesterday. As Local Affairs Commissioner of the CSA, she oversees the distribution of the UPass. "Work is being done, and we are exploring all options for feasibility."
It was the decision of the CSA Board of Directors last night to re-open the vote starting tomorrow and running three days until 11:59pm on Friday April 1, 2016. The question remains the same, asking students to approve a $50 increase to the UPass over the next five years starting this summer; the full phase-in will see a $15 increase for 2016/17, a $10 increase each school year between 2017 and 2020, and a final $5 increase in the 2020/21 school year. In all, 72 per cent of students voted in favour of the increase a couple of weeks ago.
The fate of the UPass if it fails to get quorum, or if the vote just fails, is unknown. I spoke to Phil Meagher, General Manager of Guelph Transit, and said he could not answer any questions because a "media blackout" was agreed to by the City and University administration until after Friday and the result of the vote. According to the CSA website, there are no guarantees of a new deal from Guelph Transit if the referendum comes back with another negative result, and they don't know how much students might have to pay for a pass, or what other Transit services might be affected. In fact, the CSA cannot say what the exact consequences may be, but note on the referendum page that they would "pursue all avenues possible to attempt to ensure continued accessible transit services for students (though the outcome of this is not guaranteed)."*
The lesson here to students then is to get out and vote! You don't even need to "get out" because the ballot will be coming to your Gryph Mail inbox.
*Edited for clarity March 29, 5:15 pm.
Posted by Adam A. Donaldson at 11:18 AM