Behind the Scenes, Tempers and Patience Wearing Thin at City Council 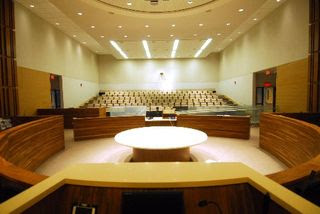 If it wasn't clear during last December's budget meeting that there's a growing schism around the horseshoe at Guelph's city hall, the signs may becoming even more clear after the city council meeting on January 25. What seemed on the surface to be a snafu about quorum could be a warning that council is even more deeply divided than they appear with all those 7-6 votes.
On January 25, the scheduled open meeting that began at 7 pm was preceded by a closed meeting that began at 5 pm. Mayor Cam Guthrie opened the public meeting, on time, at 7 pm, with 10 of the 12 city councillors present; Karl Wettstein and June Hofland were absent. After taking care of the approval of the minutes, the Mayor's announcements, and a vote to approve the auditor for the Guelph Junction Railway, council excused itself to conclude it's closed meeting. And that's when things got weird.
Somewhere between when council returned to its closed meeting at 10 minutes after 7 pm, and when the open meeting resumed almost 30 minutes later, four councillors had departed the meeting according to the city's own minutes. This left council, which still had business to perform in the open meeting, in an operational conundrum: they didn't have quorum, which, according to the bylaws governing city council meetings, is just a simple majority of council.
Reading over the draft minutes from January 25, you get the facts, but not the story. The subject of the final 30 minutes of the closed meeting was "Guelph Municipal Holdings Inc. Governance and Organization Performance." In a closed meeting, according to the bylaw, "only the procedural motions and direction given to staff" are recorded, so we know the general details about the issue being discussed, and in this case it was a matter of "security of the property and personal matter about identifiable individuals." We also know the result, "Council received information and this matter is ongoing." So why did one-quarter of council walk away?
An anonymous source, one that was privy to the details of the meeting, has told me that the four councillors were upset that Mayor Guthrie had closed the meeting to the executive team, including the Chief Administrative Officer. He then allowed them into the meeting "last minute" where they were given a complex four page document that they had to be prepared to answer questions about. On this point, the source said that staff was "skillfully hung out to dry."
Compounding the matter, the source explained to me, was that there was "no rush on the issue" being addressed in the closed meeting. The four councillors abstained from the vote believing that the direction the mayor wanted was "politically driven" and was "exposing the city to fiduciary risk" and "legal and repetitional damage" that was "unfortunate and avoidable."
The minutes note that Councillor Mike Salisbury was the first to leave the meeting at 7:25 pm, while Councillors Phil Allt, Cathy Downer, James Gordon, and Leanne Piper left the meeting 11 minutes later at 7:36 pm. Gordon would return to the open meeting to establish quorum so that business could proceed, but the audio recording of the council meeting available online doesn't include sound from the two or three minutes where the remaining councillors looked for a seventh to make quorum.
Before the meeting concluded, Mayor Guthrie read off the list of items discussed in the close session and their resolutions, prefacing it by saying, "I would like to read this for transparency reasons: Council moved a motion to move into closed session to consider business it's permitted to due under the Municipal Act, and as listed on today's meeting closed agenda, the following items were considered."
Is there anything that can officially be said on what happened two weeks ago. I asked all members of city council and the mayor for comment on this matter. Allt and Salisbury did not want to speak on the record, while Gordon and Downer said that Municipal Act bars them from talking about anything that happens in camera.
Piper, meanwhile, walked a fine line, but in an official statement she did confirm some of what the anonymous source was referring to. "Council is bound by strict Closed Meeting protocols, as well as a very clear Procedural By-law and CAO By-law about how the business of the Council and the city are to be enacted, how meetings are to be called and conducted, and the limitations of such meetings," the Ward 5 councillor said in an email.
"If I believe there is risk to the corporation, council or staff, I have an obligation to raise these matters for a ruling in Closed Session," she added. "In the event that I feel this risk has not been addressed, I believe I have a personal and ethical obligation to excuse myself from the proceedings. I exercised that right for the first time in my nine-year council tenure last week."
So what does this all add up to? A definite note of concern for citizens that called on council to unify for the good of the city, and now maybe seeing it fall apart just 14 months after the latest term began.
Posted by Adam A. Donaldson at 9:00 AM

Thanks for this story. The city is suffering from the lack of a regular local news source.

Thanks Bill. Not to turn your compliment into a commercial, but it's one of the reasons I'm crowd-funding for this blog now. Click on the giant P on the right to learn more.

I'd consider doing so, but have you posted anything about how the expanded news service would be organized? For profit or non-profit? Will there be an editorial board? If so, how would they be selected? Are you interested in hiring some staff?

There is a real need for this, but people won't buy a "pig in a poke". If you've spelled this out somewhere, could you direct me to the place?

There's a video on the Patreon page that answers some of your questions, but I'll address them here too:

Organization: It's just me right now. The initial ask for the campaign is $2000. For that amount, I can make Guelph Politico, basically, my full-time job. (My initial goal is $1000 for part-time). At the $3000 level I will be bringing on paid contributors, namely a producer for the podcast and freelance contributors.

If Politico goes bigger than that, we will be into discussions on staff, editorial boards and statuses. For now, I'm just trying to pay the bills.

Also, I kind of take exception be labelled a "pig in a poke" considering I've been keeping this blog going for almost 8 years. If I am trying to con people, that's a lot of time, effort and energy for a couple of thousand dollars.

Don't be so quick to take offence. I've just come across your blog and subscribed to it. One of the problems with blogging is that it is hard to build an audience in a geographic community instead of a community of interest. I'm not concerned about whether or not you are trying to steal money from people, but rather whether or not you have an axe to grind or simply cannot get along with other people. Guelph needs a new news gathering institution, not several eccentric people with blogs. I'm just trying to find out if you are the person to build that new on-line organization.

If anyone is concerned about how effective one voice can be, I seem to recall that Earnest magazine was fairly successful in afflicting the comfortable back in the day (or, at the very least, comforting the afflicted...).
Adam's record speaks for itself.
It would be great to raise enough for more staff. That's up to us.
Anyway, I'm in.

Okay. Well I'm big enough to admit that I misread the situation. You're absolutely right though, there are some bloggers [*couch*GerryBarker*cough*] that do have an axe to grind. So I would encourage you, and anyone that may have that concern to look at the blog thoroughly and judge for yourself. Am I fair? Am I factual? Am I balanced? All important questions, and I am very dedicated to being open and honest about all aspects of this process. Thanks for posting!

Thanks Adam for taking on this huge task! As someone who attends most Council Meetings I appreciate you taking the time to explain the details of the meetings to those who may have missed one! I also enjoy following you on twitter! :)