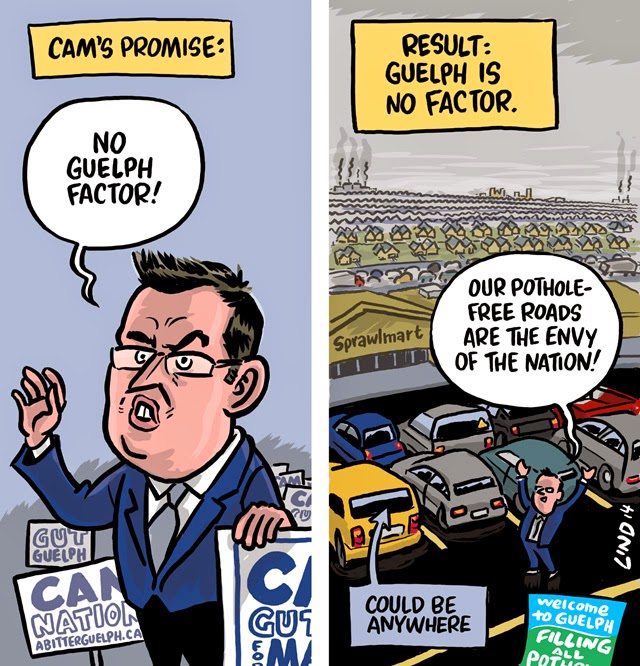 The discussion about election matters in the last couple of weeks has turned nasty. Well, the conversation is about nastiness, not necessarily that people talking about it are being nasty to each other (although from what I've heard there's some of that too). Since I'm a lover of all things cultural, one recent trend in particular caught my eye, and that was a pair of cartoons by noted Guelph cartoonists that have headed waist deep into the campaign, and they seem to have a common target in mind.


The above cartoon is by Gareth Lind, who for years drew the comic strip Weltschmerz, which was published in Echo Weekly and other alternative publications. I'm not sure if it ever made the pages of the Guelph Mercury to whom it was submitted, but it was posted on the 59 Carden Street blog. The cartoon makes reference to "The Guelph Factor," a buzz term that supporters of the two leading mayoral candidates have been trying to define or redefine to suit their narrative. From Lind's point of view it seems that he thinks Cam Guthrie's remedy will make Guelph indistinguishable from many other bedroom communities in southern Ontario.
And then there's this: 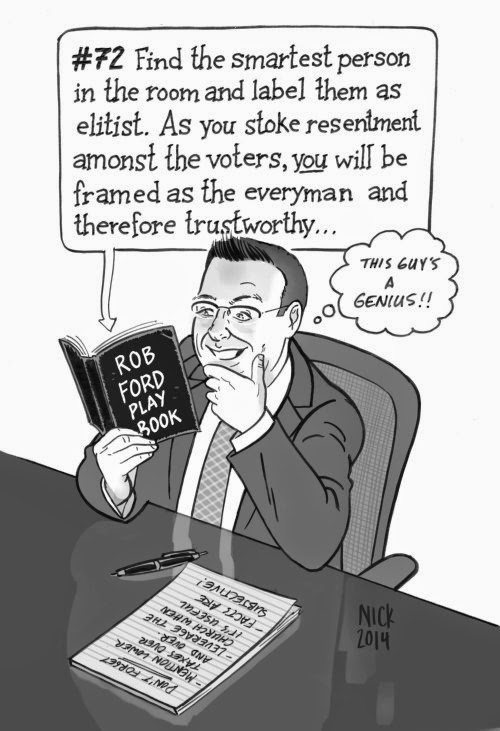 This one's from Nick Craine, and was published in the edition of the Guelph Tribune from earlier this week (you can also find it on his website here). I would say that this is the more vicious of the two, and represents an unfair comparison between Guthrie and Toronto Mayor Rob Ford. While I do recognize that the blurb from the rule book is essentially accurate as to how Ford debates and approaches public policy, it's something I don't think I've encountered in any of the numerous times I've interacted with Guthrie.
The Lind cartoon has a bit of this too. Note in the bottom right hand corner a sign that says, "Welcome to Guelph, Filling all Potholes," a reference to Ford's preoccupation with retail politics like responding to someone who needs a pothole filled on their street. Not that there's anything wrong with that. There's also nothing wrong with populism, and indeed Guthrie does engage in some of that, like refusing to accept pay increases for city councillors. Guthrie plays well to an audience looking to "kitchen table" politics, they want low taxes, they want a simple garbage system, and they want lots of stores and malls to go to. All that is fine, but why does that make Guthrie the Guelph face of Fordism.
Truthfully, it doesn't. Ford, and his brother Doug, have an ideology born of facts known only to them. How else do you explain the Ford transit plan that suggests over 40 kilometres of subways can be built for $9 billion while their 7 kilometres of subway they've already passed in Scarborough will cost by itself $4 billion? Where will the rest of the money come from? "The private sector," a nebulous body of unknown persons and companies with a bottom less supply of cash and interest in building things for the government. Of course reality is what you make it for the Fords. Doug's missed 53 per cent of council votes, but he insists his attendance record is better than everyone else. Rob has a drug problem, but the Ford family matriarch insists that a little weight loss will solve all that ails him. They say truth is stranger than fiction, and the Fords are living proof of that.
And that brings me to Cam Guthrie. Other than liking lower taxes and smaller government is there really something Fordish about the man? Does politically disagreeing with someone make you enemies for life? Are we in the midst of a clan-like blood feud out of the Middle Ages where Clan Farbridge must eliminate Clan Guthrie lest they wreck havoc on the land of Guelph? Apparently. And apparently until October 27 that's the way it's got to be. But let me ask one more question: What happens on October 28? There can only be one after all.
Posted by Adam A. Donaldson at 1:47 PM

Thankfully, Cam Guthrie has brought nothing like the Fords' circus act to town. Neither have I heard much of the class warfare rhetoric ("elitists") from him, though I have not followed his every move by any means.

He does strike me as more populist in style than Mayor Farbridge. As the notepad in the cartoon above mentions, he talks tax cuts a lot, notes his Christian convictions, and sometimes throws scary "facts" around (such as a 14% tax rise if he is not elected).

As you say, there is nothing criminal in being populist and it does heighten the contrast with the Mayor.