No Barbeque For You! 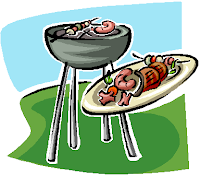 I noticed a post on the Mercury's From the Editors blog the other day that interested me in light of the whole robocall controversy. Apparently there is no local Conservative Party barbeque this summer. Now political parties of all stripes usually use Parliament's summer vacation time to jazz up the local support and thank volunteers and party members for their hard work. But the resounding silence from the upper leadership of the local Conservatives seems to be having a trickle down effect on their supporters.
As evident on their website, there's nothing on the upcoming events page, and, as the blog pointed out, the call for volunteers is old. No Conservative riding association newsletter has been put out since Fall 2011, despite the fact that in it are a number of initiatives, including the recruitment of a new Conservative candidate, are mentioned within it. And on the front page, really no indications that anyone's updated the website for several months now. Reversely, the local PCs have been very active. Granted they have a real chance of going to the polls before the Federal Conservatives, but if there's one thing I thought the local Federal riding association had, it was a bottomless bag of disdain for our Liberal MP Frank Valeriote.
In a way it's sad. After all, most of the people active in the local Conservative Party are merely passionate about politics, and are working towards keeping a government in place to fulfill their vision of what Canada should be. They too are sickened by the notion that someone or someones involved in their party had any hand in trying to rob other Canadians of their franchise, so maybe now's not the time to have some kind of celebration, no matter how typical or traditional.
Unfortunately, I think the secrecy and the tight circle created to confront the robocall scandal has farther reaching implications than the right to remain silent. If you look to the Guelph CPC website the only name you can associate with the riding association presently is Steve Vos, the president. He's the only person identified as part of the Board. The secretary, the CFO, the person in charge of communications, all have no names attached. So all we're stuck with is the usual suspects, and they're not talking, and indeed have gone to great pains not to talk.
Now I get that there's no election for another three years, but the Conservatives used to be anxious to put Guelph in their column, and if there ever was a practical reason for the local campaign to be involved in the robocalls, it would be because they were really, really committed to winning Guelph. Even despite the accusation of illegal means used, there are still a number of Guelph Conservatives that want to win the riding for the home team, and do it honorably. I guess it's just a miserable fact that in this hot summer, local Conservatives seem left in the cold.
Posted by Adam A. Donaldson at 1:24 AM