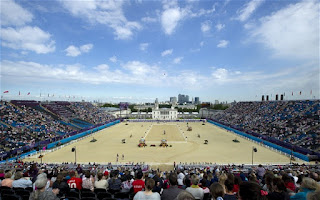 If you've seen any of the Olympics so far, you will have surely noticed that they invited a lot of empty chairs to this year's games in London. One would think that a major urban centre like London (versus places in "the middle of nowhere" like Salt Lake City, Utah) would have no problem attracting people to watch the games in person, but here we are, like in Athens and Beijing, with a lot of empty sold out events.
Britain's Culture Secretary Jeremy Hunt called the development "very disappointing." BBC Olympics correspondent James Pearce retweeted a comment from someone calling a photo of empty seats at the North Greenwich Arena "disgraceful." But the real disgrace is that the fault of this falls not on the heads of the people of London, but on the games' own organizers.
You see, these seats are for VIPs: members of the International Olympic Committee, guests of various corporate sponsors, other Olympic athletes and their families. Many are reporting that these "sold out" events have plenty of people, "packed to the rafters" according to a CBC report, but in the higher tiers, the ones you see off camera.
Now Olympic organizers are investigating why - as if there's really a root, unknown cause for the matter - and in the meantime are giving passes to soldiers and school children in an effort to make the venues look more full. Many are calling on the Powers That Be to have a 10 minute rule or something, that any open seats on the lower tiers should be opened on a first come-first served basis to the people in the nosebleeds. Can't see why that shouldn't be a problem.
Sebastian Coe, head of the London Organizing Committee, at a news conference Sunday said that as God as his witness, he'll make sure to get people's bums in those seats. "We take it seriously," Coe told reporters. "That's why we will make sure where we possibly can that we get people into those seats when they're not being used."
It's weird in this post-Occupy age to see this kind of tyranny of the ruling class, especially at the Olympic Games, which we are continually told (or sold) are meant for everyone. Hate to harp on the Olympics so much, but it might be worth investigating why the Olympics haven't managed to perfect the same method major events around the world use when they have extra seats: rush lines!


Why so many empty seats at London games? by CNN_International
Posted by Adam A. Donaldson at 7:47 PM