Politically Speaking, He Won't Be Back 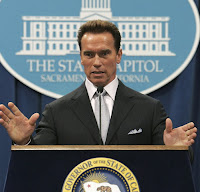 Hard to believe that once upon a time, everyone from Robert Novak to the makers of Demolition Man, believed that the political fortunes of Arnold Schwarzenegger would take him right to the White House. This despite the fact that the U.S. Constitution would have to be amended to make it happen. But today, "The Governator" left the office and residence of California Governor, leaving the state in worse economic condition than he inherited it in, and with lower approval numbers than the man he replaced in a recall election in 2003.
For some strange reason, the thought of many people on the right in the U.S. was that Schwarzenegger was going to be their new golden boy. Of course, he didn't agree with most conservatives on guns, gays and the environment, three huge wedge issues on the right, but who cares? Ah-nuld had name cache. No experience, no problem, because when people hear the name "Schwarzenegger" they know he means business. They've seen the films that prove it. Which is why Schwarzenegger's "In with a Bang, Out with a Whimper" tenure as California's Governor could almost have been scripted by the same Hollywood hacks who penned such Schwarzenegger epics as Collateral Damage and The Sixth Day.
Like the Hollywood star that he was (is), Schwarzenegger made a huge splash when he entered the California Governor's race during the 2003 recall election, and he handily won nearly 50 per cent of the popular vote, standing out high above the veritable gong show-like list of candidates. Schwarzenegger was ushered in on the promise that his fiscally conservative ideals might somehow help California weather the financial storm brought on by "Spendocrat" Gray Davis.
This, however, did not turn out to the case, and in a ballot measure just two years after he was elected, Schwarzenegger targeted who, in his opinion, were the real causes of California's woes: teachers and unions. Before this, the Governor's biggest move against the budget was to cancel an unpopular hike in the vehicle license fee, which cost the State of California $4 billion right off the bat. (Is there a lesson here for a certain new Mayor in Canada who ran on canceling a "car tax"?) As for those ballot initiatives, items like stemming the amount of money that unions can spend on political campaigns and putting caps on school budgets, were resoundingly defeated. There was a chink in the Governator's armour, and it was a vulnerability further exploited by both Republicans feeling betrayed and by Democrats smelling blood in the water.
On the other hand, Schwarzenegger's been light years ahead of almost every other American politician on both sides of the aisle (and some politicians her in Canada) on battling global climate change. Amongst Schwarzenegger's accomplishments on his environmental record is the U.S.' first cap on greenhouse gas  emissions, imposing tighter restrictions on polluters, issuing an executive order to reduce greenhouse gases to 80 per cent below 1990 levels by 2050 and reducing CO2 emissions by putting a cap on the number of carbon credits the state's power plants could buy. Of course, these measures further alienated Schwarzenegger from his base who called his pro-environmental measures "job killing", even though those same measures actually helped to resolve the energy crisis that began under Davis' watch.
But it's the economy that matters, and it was the reason that Schwarzenegger was elected in the first place. Leaving office with a 22-23 per cent approval rating, there's no longer a throng of supporters petitioning for constitutional amendments so that California's now former-governor can take his ambitions further. Nope, Schwarzenegger leaves office quietly, replaced in Sacramento by Democrat Jerry Brown, a man previously elected to two terms as California Governor and was once called by The American Conservative "much more of a fiscal conservative than Governor [Ronald] Regan." Brown's record as Governor from 1975 to 1983 is impressive, so he's certainly qualified to meet the current challenges in California, but he also has to overcome the lingering effects of one of last year's most expensive and combative races.
The governorship of Arnold Schwarzenegger will be remembered any number of ways in the years to come. There was his meteoric rise, the unprecedented recall election, his tremendous victory, the stumbles, the quiet successes and the lingering shadow of a worldwide recession that hit his state as hard as any other. There were mistakes, but there were also great accomplishments too. But most of all, perhaps more so than any of his Hollywood blockbusters, the Governor's position humanized Schwarzenegger in a way most had never seen. He was not a robot, or an Olympian god, or a super cop, or an alien fighter, or anything else; he was a man trying to do the best job he could do. No one could defeat Arnold the Action Hero, but it seems that reality has crushed the legend of Arnold the Political Hero.
Posted by Adam A. Donaldson at 4:54 PM