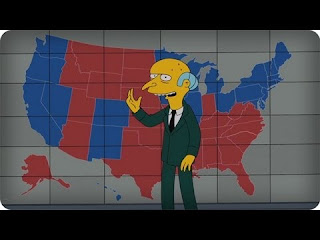 For nearly 25 years, The Simpsons have been a frequently insightful and irreverent source of political humour, and on the eve of the 2012 Presidential Election they've done it again.
In this new clip, nuclear power plant owner C. Montgomery Burns makes his case for fellow Republican Mitt Romney despite the “47 percent” tape or “the tax returns that Wesley Snipe would call suspicious.” But in the end, the whole thing might come down to an actual sniff test. But let's let Mr. Burns himself explain:

This latest Simpsons clip follows up on a previous one that once again finds Homer in the voting booth contemplating the fate of America. In it, the Simpson patriarch nearly finds himself again the victim of voter fraud as he chooses between President Obama (“I already got one wife telling me to eat healthy”) and Mitt Romney (“I hear he wears magic underpants”). Of course, there's a twist in the end:


Fans will also remember Homer's attempt to vote Obama in 2008, and how well that turned out (You know, back when voter fraud was more pervasive).


And for a blast from Presidential Elections past, there's always this nugget. Sadly, because of You Tube copyright policy clips are hard to come by, but this one begins with the line, "As a boy, I dreamed of becoming a baseball..."


Finally, I offer this snapshot from a previous opening sequence on the show. As you may or may not be able to tell, I think a lot of the people working on The Simpsons will be voting Obama on Tuesday. 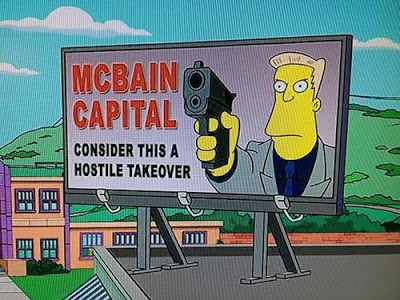