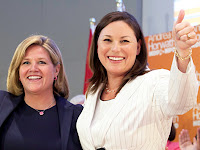 Catherine Fife's not so surprising surprise victory in Kitchener-Waterloo Thursday night opened a can of "Who-knows-what?" in terms of what's going to happen next in Ontario. It really feels like we're at a kind of crossroads, a Choose Your Own Adventure-like fork in the road that could take us to strange new worlds, somewhere passively dull, or a complete disaster that's as cataclysmic as it is unexpected. But it probably won't be that bad.
Yes, Fife, and by proxy Andrea Horwath and the NDP, do surely deserve praise and kudos for the victory, but how much of it was dissatisfaction with the Liberals, how much of it was the uncertainty of Hudak's leadership of the PCs, and how much of it is blowback from McGuinty's seemingly ill-advised attempt to make Ontario's teachers the villains of our dire financial straits.
But let's break the results down by party:
The NDP
Obviously the big winners on Thursday night, but their overwhelming success it Kitchener-Waterloo is tempered by the results in Vaughan. Fife won 18,559 votes in K-W, which is almost six-times the number of votes won by Paul Donofrio in Vaughan with 3,623. Granted Vaughan is, and was, a Liberal stronghold, but Donofrio was a distant third behind Liberal Steven Del Duca (16,380 votes) and PC Tony Genco (10,682 votes). If the margin were a little more close in Vaughan, I might feel a little better calling this an orange crush. Instead I'll call this the "orange finger." As in, the voters in K-W were giving the finger to the Liberals and the PCs. It's also a great tribute to the power of a campaign's organization on the ground; sometimes how well you get your campaign organized makes more of a difference than the actual substance of that campaign.
The PCs
If there was a big loser Thursday, it was the PCs generally and Tim Hudak specifically. Tracey Weiler put on a good showing with 14,823 votes, just 3,700 less than Fife, but with her credentials, and running in a PC held riding, she should have been able to give Fife more of a fight. Genco, meanwhile, was a weak candidate for the PCs in Vaughan, being a recent convert to the Canadian right after running as a Liberal and losing to Julian Fantino in the 2010 Federal by-election in Vaughan.
As the saying goes, the buck stops at the PC's leader Tim Hudak, but Hudak was more content Friday to throw out haymakers like saying "It's a dangerous and ominous for the province to see the power on display," of a "tsunami of public-sector union bosses." What exactly a "tsunami of public-sector union bosses" looks like, I don't know, but what all anybody heard was a political party leader in trouble and trying to point the fault to some outside monstrous force that anyone in his circumstance would have trouble fighting.
I don't see Hudak losing his job yet, but I'll say that the PCs got rid of John Tory for less than this: Hudak squandered a double-digit lead in the polls last election and failed to beat an unpopular Premier in two by-elections this week. Hudak should be mindful now of the three strike rule.
The Liberals
The Liberals come out of Thursday's elections in their still precarious position, but could it be even more precarious than they think? For McGuinty there's no security in a slim majority to look forward to, which will mean he'll have to try and find a way to work with the opposition if he doesn't want to have to go back to the polls sometime soon. And since it was the NDP that burst his majority bubble, and since that will surely embolden the NDP to be even more resistant to supporting the Liberals, McGuinty will have even more trouble creating consensus and compromise with his most likely ally in Queen's Park. In all, the result of the by-election wasn't as bad as it could have been for the Liberals, but Eric Davis' third place showing with 11,204 votes shows that the political gamble McGuinty initiated last spring when he gave Elizabeth Whitmer a government appointment to free her seat for a by-election, was maybe not so much worth the risk after all.
So What Next?
Expect the discomfort and animosity to continue at Queen's Park, but unless the fortunes of Hudak change in a significant way, he's not going to be so eager to pull the trigger on another election quite so soon. Horwath would also be wise to continue the course she's on, trying to play peacemaker and doing her best to show the NDP as a solid and viable alternative to form a government. McGuinty and the Liberals meanwhile have no where left to go but down. It's inevitable. No one can stay on top forever.
Posted by Adam A. Donaldson at 6:00 PM