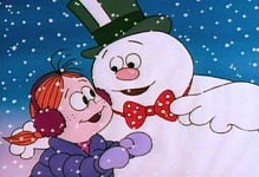 While decorating the Christmas tree last night, we watched the requisite Christmas specials on TV. First up was the classic Rankin-Bass Frosty the Snowman, still perfectly delightful after 42 years of repeated Christmas viewings and was once again enjoyed immensely.
But next was a Christmas special I had never seen before, and it was called Frosty Returns. It must have been relatively new because it featured the voice of John Goodman as Frosty, and Elisabeth Moss as Holly, Frosty's new school-aged friend, because presumably his original school-aged friend, Karen, would probably be a grandmother herself by now.
You see, Holly is a bit of a dreamer. She wants to be the greatest magician in the world, which, while cool, probably isn't going to do much in contributing to the growth of the world economy. Stage magic is, after all, an outmoded art form that has no transmedia value. She'll probably end up a drain on the system at some Occupy movement, complaining about her $75,000 student debt when her degree in theatre arts goes no where.
Holly is also the school weirdo, and is the object of fun amongst her classmates because of her pie-in-the-sky dreaming, rather than being more invested in down to earth activities like sports, or mocking the nerdy Charles as he gives another presentation about the dangers of climate change. Charles is of the opinion that losing snow and enjoying a more temperate climate during the winter is a bad thing. Apparently, the education in this town, Beansboro, has failed to teach kids that the science is still inconclusive about global warming, and Charles doesn't bother to discuss the alternative theory of cyclical changes in weather patterns.
It's easy to see why Holly wouldn't question it when a talking snow man approaches her at the beginning of the story. Arriving in town, he says revealing that he's a transient and seemingly proud of it, Frosty meets Holly, and recognizes her name when she introduces herself. Again Holly doesn't find this suspicious because it clearly indicates that Frosty's been following her for some time, probably posing as another little girl online.
But this "Frosty" says that he's come to Beansboro for it's famous annual winter festival. Yes, "winter festival," clearly the ACLU made a fuss and all references to this being a Christmas festival were removed. Another victory for the prosecutors of the War on Christmas, and worse still there seems to be no visible opposition. Undoubtedly the work of a strong armed liberal media.
But as the winter festival approaches, a rich businessman (read: job creator) named Mr. Twitchell has developed a product called "Summer Wheeze," an aerosol spray can that melts snow on contact. The residents of Beansboro are elated as the recent heavy snowfall, again an indication that global warming is a liberal hoax, can now be removed with a simple spray of the can rather than back-breaking manual labour that used to be done by illegals. "Summer Wheeze" is a successful product, and Mr. Twitchell expects to be reward with the community's highest honour: being made King of the winter festival.
But Holly, Frosty and Charles want to stop Mr. Twitchell and "Summer Wheeze" from getting rid of all the snow, even though the market has clearly decided in favour of "Summer Wheeze." Despite this, the trio try and rally support by occupying the castle at the winter festival. As the townspeople gathered, wanting the fair and untarnished use of their park, Frosty and friends remain defiant and persuade the people of Beansboro through song that winter and snow are both good things. In other words, green sector jobs like ski lift operators and ice castle makers are more important than an industrialist being allowed to do his business unencumbered by regulation.
Ultimately, Frosty is crown king of the festival, but in a move that smacks of socialism, he invites Mr. Twitchell to join him on the King's sled. Nothing is really resolved, snow's still a pain in the neck for the townspeople, Summer Wheeze is still readily available, Holly and Charles are still weird, but Frosty happily departs, probably to poison more kids with his liberal agenda.
So did I just go too far?
I looked up Frosty Returns on Wikipedia, and I learned that the short was made in 1992, and that its heavy environmental themes had already been noted. But is that a bad thing? Haven't cartoons previously taught us about the need for compassion, understanding, and love, all of which are probably considered more liberal themes?
What brought this on was a video posted last week from a Fox News show where two pundits railed against the new Muppet movie for its plot about a rich oil man trying to buy the old Muppet theatre to get at the oil underneath. The oil man is the villain, which plays to liberal Hollywood's characterization of big business, progress, industry and oil as being bad, evil even.
Since the rise of the Occupy Wall Street, its opponents have tried to promote the idea that it's class warfare, and that the rich are being vilified, and any efforts to correct the tremendous disparagement between the rich and poor is, in effect, "punishing success." But as well know, real life problems are enabled by Muppets who don't get how lucky they are to live in America, where you can blame the rich and all you get for your efforts is yelled at by Fox News. Oh well, maybe next Christmas.