University Students Prove to Be Good Influences Too 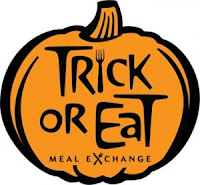 It's not been a good fall for the students at the University of Guelph, as a few bad eggs keep spoiling their rap with the local townies. Shoot, even just yesterday a letter in the Guelph Tribune highlighted again the alleged drunk and rowdy behaviour of the undergrads at the U of G.
But the university students of Guelph also do a lot of good in the community, as once again evidenced by the food and donations collected in the annual Trick or Eat campaign. According to The Ontarion, U of G students collected $70, 498 in food donations on Halloween night, with an additional $6,000 in online donations. Guelph's nearest competition in total donations, at least in Ontario, were Western and Carlton with $12,000 each.
The U of G's efforts on Halloween comes out to over 35,000 lbs of food. That's a lot for a couple of hours of work, and while others might rest on their laurels, Gryphons, being a different breed, can't let it slide that this year's total was down slightly over last year. To make up the difference, bins have been placed at local Zehrs and No Frills stores for donations. Of course, if there was one accomplishment that separated this year's Trick or Eat above others in the past is that volunteers made their way to my front door for the first time in years.
So in the midst of a heavy fall, where the majority of university students are getting tarred by the actions of an above average rowdy few, it's important to remember the good works of the silent majority. And that in the cold days to come, several less privileged people in the Royal City will enjoy something to eat courtesy of a University of Guelph student.
Just something to keep in mind the next time you see someone under 21 and you go to grab your pitchfork and torch.
Posted by Adam A. Donaldson at 9:31 PM